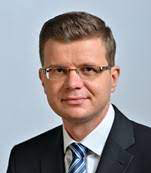 graduated from University of Economics in Bratislava, Slovakia in 1999. He continued with postgraduate study during which he was teaching courses on accounting in banking and finance. In 2004 he switched to banking practice and has been working as an IFRS expert since. His main focus are financial instruments. Most of the time he has been employed by Erste Group in Vienna. In 2014 he joined EFRAG in Brussels where he spent two years.

From 2008 his professional activities have been extended by providing trainings which are focused on the area of financial instruments under IFRS. Between 2008 and 2014 he was an external trainer for BPP Professional Education, branches in Bratislava and Prague. Since 2013 he has been cooperating with Verlag Dashöfer. His country experience includes Belgium, China, Czech Republic, Mauritius, Slovakia and Slovenia. From 2012 the trainings have been covered by his company AFIT, s.r.o.

He is author of books Financial Instruments under IFRS/IAS (2008), Capital of Commercial Banks (2006) as well as of many articles on accounting, finance and banking.